In the next week, Furious 7 will very likely cross the $1.5 billion milestone at the worldwide box office, blowing away all expectations. The Fast & Furious franchise has solidified itself as one of the biggest and most successful franchises of all-time and despite the tragic loss of star Paul Walker, it has no signs of slowing down.

A release date for Fast & Furious 8 has already been set for spring 2017, keeping the series’ tradition of pre-summer launches, and there’s still buzz about a potential spinoff for Dwayne “The Rock” Johnson’s character, CIA agent Luke Hobbs.

Hobbs was introduced into the franchise with Fast Five, the movie that helped place the series in the top tier of lucrative event movies, doubling the box office haul of its predecessor (the film that brought back all the original characters). From there, it’s been an unstoppable ride of success, each movie bring in hundreds of millions more in revenue.

A clear fan-fave, Hobbs has joined Dominic Toretto’s (Vin Diesel) “family” and is a staunch believer in his crew and what it represents. Although he had a significantly reduced role in terms of screen time in Furious 7, Hobbs has some of the best and most memorable moments, which makes him the top contender for his own spinoff film.

After Fast & Furious 6 hit theaters, Johnson told us that there are conversations happening at Universal about a spinoff movie for his character and he said it wouldn’t happen until after the 7th movie. Now that the 7th movie is out, and is a monstrous success, is a Hobbs spinoff still in the cards? And will he be back for the next core installment? 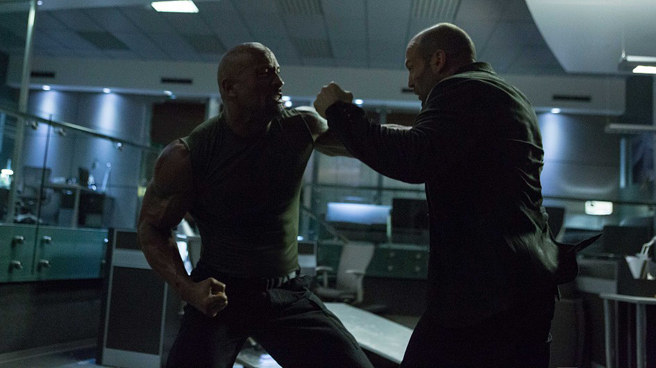 While promoting his next release, San Andreas, Johnson confirmed during a press conference this weekend that he’ll be back for Fast & Furious 8, answering a question about it with a stern “of course. It can’t go on without Hobbs.” As for the spinoff potential:

“We all are interested in it. I just had a big conversation with the studio. So we’ll see. I still think for me personally we’ve created a little bit of space for him in 7 and the gauge is set for what the audience will want. That’s my take on it, you know, but a lot of other people have to have input.”

Given Hollywood’s desire and need for lucrative long-term franchises and cinematic universes, there’s no better time than now to build on the success of Furious 7. Universal (who also also trying to restart Jurassic Park as an ongoing franchise with this summer’s Jurassic World) can bolster their release slate to potentially having Fast & Furious movies annually if they can successfully launch and introduce new characters who can cross back and forth between the core Fast movies and spinoffs.

Should Johnson lead a new line of Fast & Furious films or would you rather see him play Roadblock in more G.I. Joe movies? Is there a difference?