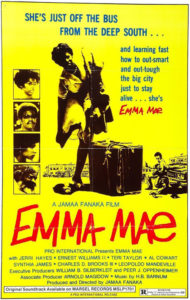 Synopsis: A Naive Country Girl from Mississippi comes to town with an aunt to the Big City. She takes up with her family and goes out with them and meets a guy. A loser, pill-popping head nothing who is involved with the local street gang. She Falls in love with him, but he gets arrested and goes to jail. With the $5K bail over his head, she tries a couple of ways both good and bad to raise money to get him out only to learn he really is a loser and doesn’t love her. She proves for a Country Girl she is smart and resourceful.

Note: Need to find release date for this film. Also need to watch this film to better identify people. Also known as “Black Sisters Revenge”. Not sure if Synthia Saint James is the artist by the same name. There’s a Q&A with Jerri Hayes in 2017 from ReelBlack.