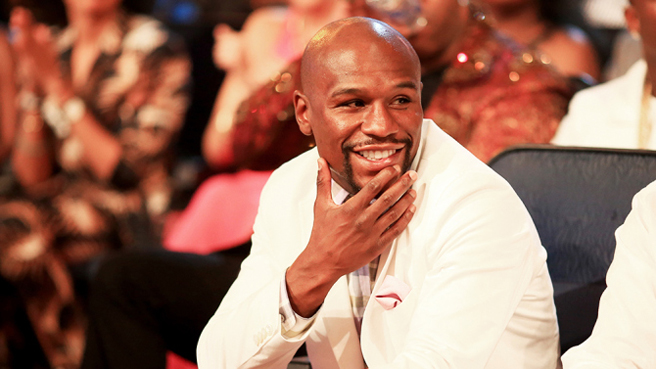 Floyd Mayweather has defeated Manny Pacquiao once again. This time, the 1-2 punch comes below the belt: his wallet.

Mayweather topped Forbes‘ “Celebrity 100: The World’s Highest-Paid Superstars of 2015″ with a whopping $300 million, much of which came from his May 2 brawl with Pacquiao, who came in at second with $160 million. Forbes published the ranking Monday, which includes actors, musicians, TV personalities, sports icons and even magicians (just David Copperfield).

The highest-earning actor on the list is Robert Downey Jr. with $80 million.

While Taylor Swift is reported to have “Bad Blood” with Katy Perry, she couldn’t draw blood from Perry in the ranking, who is third with $135 million, while Swift ties for eighth with Downey Jr. with $80 million. Meanwhile, Swift’s latest man, Calvin Harris, came in at No. 17, with $66 million.

Queen Bey (that’s Beyonce to the commoners) surprisingly comes in at No. 29 with $54.5 million. Her husband, Jay-Z, earned $58 million, coming in one spot ahead of her at No. 28. Boy band One Direction came in at fourth with $130 million.

In the sports world, NBA Finals contender LeBron James came in at No. 18 with $65 million. He couldn’t trounce tennis star No. 16 Roger Federer, who earned $67 million, or Portuguese soccer player Cristiano Ronaldo, who cropped $79.5 million at No. 10.

Coming in at the bottom of the pack is comedian Kevin Hart with $28.5 million — still an impressive bounty to end the list with.