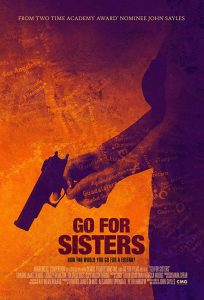 Synopsis: Bernice (LisaGay Hamilton) and Fontayne (Yolonda Ross) grew up the closest of friends, but time sent them down different paths. Twenty years later, those paths cross: Fontayne is a recovering addict fresh out of jail, and Bernice is her new parole officer.

When Bernice’s son Rodney goes missing on the Mexican border, his shady associates all in hiding or brutally murdered, Bernice realizes she needs someone with the connections to navigate Rodney’s world without involving the police… and turns to her old friend. The pair enlist the services of disgraced ex-LAPD detective Freddy Suárez (Edward James Olmos) and plunge into the dim underbelly of Tijuana, forced to unravel a complex web of human traffickers, smugglers, and corrupt cops before Rodney meets the same fate as his partners. As much a story of relationships as a story of crime, “Go for Sisters” is a welcome return to the border for master filmmaker and 2-time Oscar nominee John Sayles (“Lone Star,” “Passion Fish”).