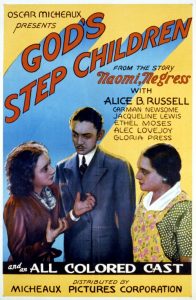 Synopsis: A stranger arrives at the home of widow Mrs. Saunders and begs her to adopt her baby daughter, whom she cannot afford to feed. After the stranger leaves, Mrs. Saunders, a black woman, realizes that the child is white, and is advised by her friend, Caroline Jones, to turn it over to the police. In the daylight, however, Mrs. Saunders sees that the child, which she has named “Naomi,” is black, and believes that the girl will make a good playmate for her son Jimmie.

Time passes, and Naomi, now a young schoolgirl, is thought by the other children to be aloof and is accused of not wanting to be black. When Naomi disappears on her way to school one day, Mrs. Saunders is told by Jimmie that Naomi deliberately avoided the black school she was supposed to attend and went to a white school. Naomi denies Jimmie’s accusation and tells her mother that he is lying because he hates girls.

When Mrs. Cushinberry threatens to give Naomi a beating for being insolent and mean, Naomi, in an angry outburst, tells the teacher that she hates her and all the other children because they are black. Naomi rejects Mrs. Cushinberry’s insistence that “we’re all God’s children,” and tells her that God “didn’t make Negroes.” That evening, Mrs. Cushinberry pays a visit to Mrs. Saunders to tell her about Naomi’s behavior, but when she realizes that Naomi has not told her mother about what happened that afternoon, she decides to remain silent. Naomi, however, has been eavesdropping, and when the teacher leaves, she begins to tell her mother that it was the teacher who was bad. Jimmie intervenes, however, and reveals the truth, that Naomi was whipped at school because was unruly and spit in the teacher’s face. Mrs. Saunders then gives Naomi a beating.

Later, Naomi starts a rumor that Mrs. Cushinberry has been having an affair with a married professor, and a riot at the school ensues. The angry crowd of students march to the school superintendent’s house and demand that he fire both teachers. Mrs. Saunders, who has been told of the riot by Jimmie, rushes to the superintendent’s office to dispel the rumor started by her daughter. While Naomi is sent to a convent, Jimmie, who has earned $6,700 by working as a Pullman porter, is approached by Ontrue Cowper, who tries to interest him in an investment in the numbers racket. Jimmie rejects Cowper’s offer, and instead invests in a farm. After proposing marriage to his sweetheart Eva, Jimmie invites his mother to live on his new farm. Naomi, who has been reformed by her life at the convent, apologizes to her mother for being a bad child. When Jimmie meets his sister for the first time since her departure for the convent, his mother arranges to have him take her to the city for entertainment.

Though things go well in the city, Eva’s aunt Carrie does not trust Naomi’s unnatural interest in Jimmie and believes that she should be watched. Aunt Carrie’s suspicions prove to be well-founded as Naomi soon confesses her love for her adopted brother. When Jimmie, Eva and Naomi return to the country, Jimmie introduces Naomi to his friend, Clyde Wade, who immediately falls in love with her. Naomi, however, finds him repulsive and confesses to Jimmie that she has always wanted him to marry her. Realizing that Eva would be crushed by the loss of Jimmie, Naomi consents to marry Clyde. One year later, Naomi tells her mother that she is leaving Clyde and her newborn son and that she is also “leaving the Negro race.” Naomi soon marries a white man, Andrew, who realizes that she is a mulatto when he notices her reaction to seeing her son and her mother. Naomi tries to lie about her past, but he sees through it and turns her out. After getting one last look at her family, Naomi drowns herself in the river.