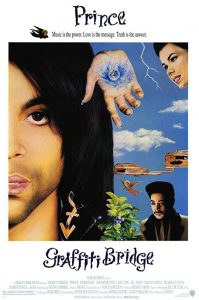 Synopsis: Graffiti Bridge is the unofficial sequel to Purple Rain. In this movie, The Kid and Morris Day are still competitors and each runs a club of his own. They make a bet about who writes the best song and the Kid’s club is on the line. But the Kid has become a brooding character who writes letters to his dead father and ponders spirituality. Under the Graffiti Bridge in the park, he meets Aura, an angel-like poet with whom he falls in love. Once again, Morris tries to steal his girl, and in the end, she dies in a tragic accident. But not in vain, she has given the Kid his edge back, and Morris gives in and lets him keep the club after hearing the moving ballad the Kid composed.

Note: I wasn’t able to identify everyone.