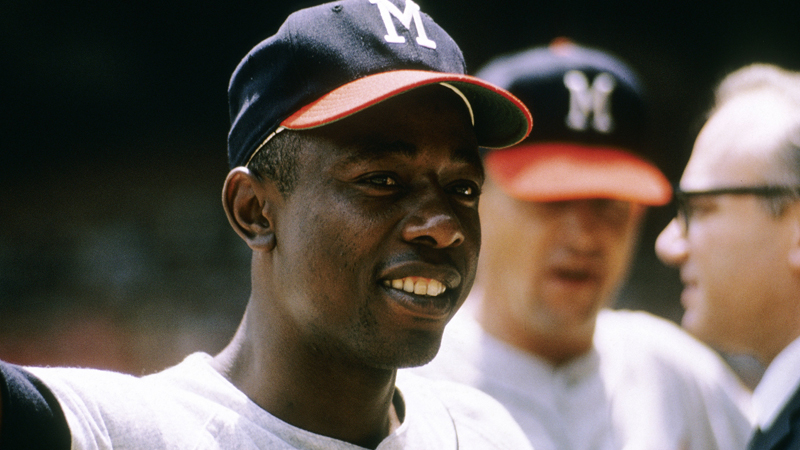 (Photo by Focus on Sport/Getty Images)

Henry Aaron, the slugger known as “Hammerin’ Hank” who cemented himself in baseball lore when he broke Babe Ruth’s career home run mark in 1974, died Friday. He was 86. His daughter confirmed the news to media outlets but did not provide details.

The Hall of Famer played 21 seasons for the Milwaukee/Atlanta Braves and finished his Major League career with two seasons on the Milwaukee Brewers in 1975-76. A 21-time All-Star, he topped Ruth’s treasured mark with his 715th homer — a blast against the Los Angeles Dodgers’ Al Downing at Atlanta-Fulton County Stadium on April 8, 1974. It remains among baseball’s most-played clips of all time.

“Derek, our family and I join the nation in sending heartfelt condolences to Mrs. Billye Aaron, the beautiful wife of Henry “Hank” Aaron for nearly 50 years, and the entire family. This is a considerable loss for the entire city of Atlanta. While the world knew him as ‘Hammering Hank Aaron’ because of his incredible, record-setting baseball career, he was a cornerstone of our village, graciously and freely joining Mrs. Aaron in giving their presence and resources toward making our city a better place. As an adopted son of Atlanta, Mr. Aaron was part of the fabric that helped place Atlanta on the world stage. Our gratitude, thoughts and prayers are with the Aaron family.”

Born on Feb. 5, 1934, in Mobile, AL, the future legend had his first big-league tryout at age 15 with the Brooklyn Dodgers before playing in the Negro leagues for about half a year. In 1952, he signed with the then-Boston Braves and made his Major League debut in 1954, a year after the club moved to Milwaukee.

He made the All-Star team as a right fielder in 1955, his second season. A year later, Aaron won the National League batting title with a .322 mark. An early career highlight came when he finished the 1957 season — the only time he’d win the Most Valuable Player Award — with a home run to clinch the pennant. The Braves went on to beat the New York Yankees in a seven-game World Series for the only title of Aaron’s career.

Aaron became the first player in Major League history to reach both 500 homers and 3,000 hits. He hit 40 or more home runs in seven different seasons, finishing third in the MVP voting a remarkable six times. He was inducted into the Baseball Hall of Fame in 1982.

Aaron smacked his 713th home run near the end of the 1973 season, leaving him one shy of tying Ruth’s mark — a record many thought could stand forever. That winter and into the spring, he would receive racist death threats over having the gall to approach the revered record.

But shatter it he did. On a misty night in Atlanta, where the Braves had relocated in 1996, Aaron demolished a Downing pitch and sent it high over the left-field wall. His home-run trot, interrupted by fans who came onto the field to pat his back, is among baseball’s hallmark moments. The game was televised to a national audience, and Vin Scully called it for the Dodgers.

In 1999, Major League Baseball marked the 25th anniversary of Aaron breaking Ruth’s record by establishing the Hank Aaron Award, which is voted by fans and the media to honor the top hitter in each league.

He was awarded the Presidential Medal of Freedom by President George W. Bush in 2002.

Aaron’s celebrity made him a regular on the TV talk-show circuit, appearing on popular programs ranging from The Ed Sullivan Show and The Mike Douglas Show to Late Night with David Letterman, The Tonight Show with Jay Leno and Conan. He also took part several times in the popular made-for-TV competition Home Run Derby. In 1974, Aaron got the ultimate “tribute” of the era when he was subject of a Dean Martin’s Celebrity Roast.

He went on to appear as himself in countless documentaries and on such TV series as Happy Days, MacGyver and Touched by an Angel and voiced himself in a 2002 episode of Futurama.