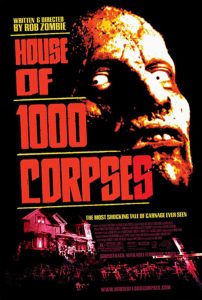 Synopsis: On the eve of Halloween, on October 1977, four friends–Bill, Jerry, Mary, and Denise–embark on an exciting cross-country road trip to write a guidebook about offbeat roadside attractions in America’s less-travelled roads. Before long, the young explorers chance upon Captain Spaulding’s Museum of Monsters and Madmen, only to become infatuated with the local legend of a deranged serial-killer doctor, and cross paths with the mysterious hitchhiker, Baby. However, when the unsuspecting group meets Baby’s eccentric family after having a flat tyre, an endless night of terror, torture, and murder ensues. Has anyone ever got out alive from the House of Thousand Corpses?