Trump had said in April that he was considering the pardon after receiving a call from actor Sylvester Stallone. Previous pleas to presidents by celebrities and lawmakers had failed.

“I am taking this very righteous step, I believe, to correct a wrong that occurred in our history and to honor a truly legendary boxing champion,” Trump said during an Oval Office ceremony, where he was joined by Stallone and boxers Lennox Lewis and WBC heavyweight champion Deontay Wilder. “It’s my honor to do it. It’s about time.”

Trump said Johnson had served 10 months in prison “for what many view as a racially motivated injustice.”

Johnson, who died in a 1946 car crash in North Carolina at 68, finished with a career record of 73-13-10 and was inducted into the International Boxing Hall of Fame in 1990. He won the unofficial black heavyweight championship in 1903 with a 20-round decision over Denver Ed Martin. Because of his race, however, Johnson was repeatedly denied the chance to fight Jim Jeffries for the heavyweight championship. 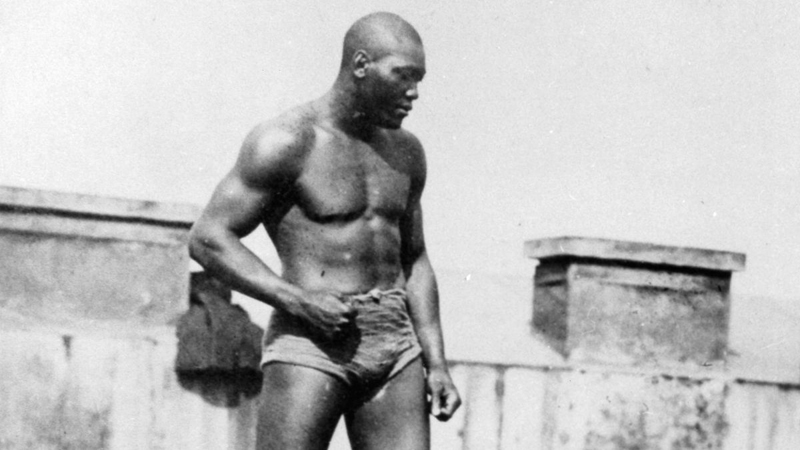 Jack Johnson was the first black man to hold the heavyweight title. The Ring Magazine/Getty Images

Jeffries, who had won the title in 1899, retired as champion in 1904 still undefeated at 19-0-2. Marvin Hart succeeded Jeffries as champion by knocking out Jack Root in July 1905 in a fight for the vacant title. A few months earlier, Hart had beaten Johnson in a 20-round decision, one of several nontitle bouts Johnson had with white boxers.

Hart lost his title the next year to Canadian boxer Tommy Burns, who in 1908 would agree to fight Johnson in Sydney. Johnson won a TKO over Burns in the 14th round in December 1908 to become — at the age of 30 — the first black man to hold the world heavyweight boxing championship.

Johnson, born in Galveston, Texas, in 1878 and the son of former slaves, enjoyed showing off the riches his boxing prowess earned him. That flamboyant lifestyle, a penchant for taunting opponents in the ring and his relationships with white women infuriated white people across the country.

He had already defended his title four times when Jeffries, the latest to be dubbed “The Great White Hope” — later the title of a play and movie based on Johnson’s life — came out of retirement to finally face Johnson. But in the “Fight of the Century” in Reno, Nevada, Johnson dominated in taking a 15th-round TKO in July 1910, a result that led to deadly race riots across the country.

While Jeffries was well past his prime, the former champ conceded, “I could never have whipped Johnson at my best. I couldn’t have hit him. No, I couldn’t have reached him in 1,000 years.”

The U.S. Department of Justice began investigating Johnson for violations of the Mann Act soon after it became law in 1910. The law made it a felony to transport across state lines “any woman or girls for the purpose of prostitution or debauchery, or for any other immoral purpose.”

The Mann Act’s purpose was to stop human sex trafficking, but the broad language allowed for it to be used to prosecute men for premarital, extramarital and interracial relationships, even if consensual.

In October 1912, the mother of Lucille Cameron accused Johnson of kidnapping her daughter. But the Justice Department was unable to make a case because Cameron was not a cooperative witness. She married Johnson later that year, the second of three white women to become his wife. 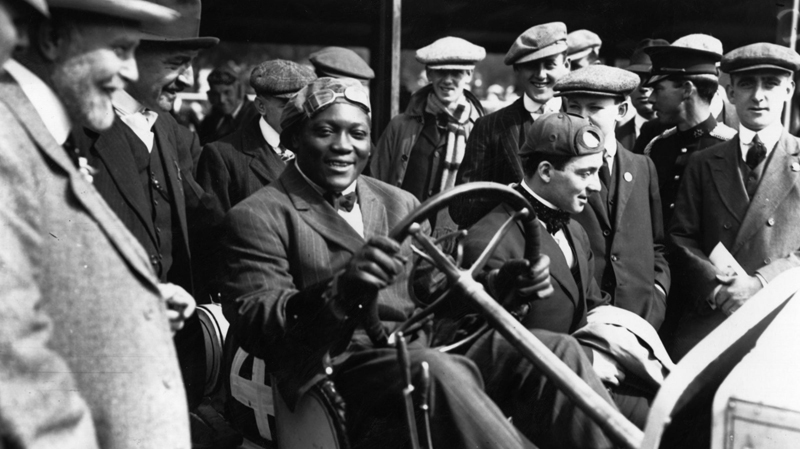 The Justice Department subsequently brought a case against Johnson with the cooperation of a former girlfriend, Belle Schreiber, and in May 1913 he was convicted by an all-white jury for violation of the Mann Act. A month later, he was sentenced to a year and a day in jail.

Out on bail pending appeal of the conviction, Johnson fled the country with Cameron and continued to fight overseas, including two defenses of the world title in Paris. But in an April 1915 title bout in Havana, Johnson was knocked out by Jess Willard — in the 26th round — and it would be more than 20 years before another black man, Joe Louis, became champ.

Johnson continued to fight, primarily in Spain and Mexico, before turning himself in to U.S. authorities at the Mexican border in 1920. He served nearly a year in prison in Leavenworth, Kansas, and never again fought for the world title.

He lost seven of his last nine professional bouts and participated in exhibition bouts until the age of 67.

“I applaud President Trump for issuing a posthumous pardon of boxing legend Jack Johnson, whose reputation was ruined by a racially charged conviction over a century ago,” McCain said in a statement. “For years, Congress has overwhelmingly supported legislation calling on multiple U.S. presidents to right this historical wrong and restore this great athlete’s legacy. President Trump’s action today finally closes a shameful chapter in our nation’s history and marks a milestone that the American people can and should be proud of.”

“It is the right thing to do. I’m just so happy that Senator John McCain, who has led our efforts to achieve a posthumous pardon for Jack Johnson, has lived to witness this moment,” Burns said in a statement. “The pardon announced today helps correct an injustice experienced by Jack Johnson. But it also reminds us of a racist past and how even today racist remarks and coded words are used to imperil African Americans, especially Black men, and to advance an Un-American agenda.”

The Associated Press contributed to this report.