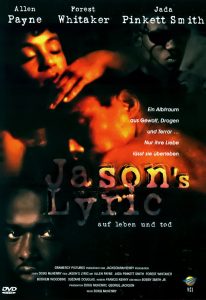 Synopsis: The story of a young man, Jason (Allen Payne) who must confront his trauma-induced insecurity about love, as well as a sense of owed responsibility to his mother and troubled brother Joshua (Bokeem Woodbine). Jason, an assistant manager and sales clerk at an electronics store, falls in love with Lyric (Jada Pinkett Smith) and finds happiness, but his family history and mentally ill war veteran father, Maddog (Forest Whitaker) plague his life’s plans before he can leave it all for a better life.