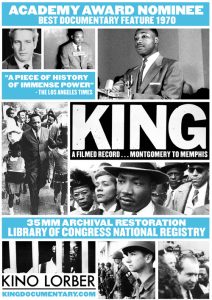 Synopsis: Constructed from a wealth of archival footage, KING: A FILMED RECORD…MONTGOMERY TO MEMPHIS is a monumental documentary that follows Dr. Martin Luther King, Jr. from 1955 to 1968, in his rise from regional activist to world-renowned leader of the Civil Rights movement. Rare footage of King’s speeches, protests, and arrests are interspersed with scenes of other high-profile supporters and opponents of the cause, punctuated by heartfelt testimonials by some of Hollywood’s biggest stars.