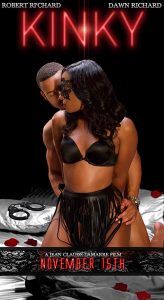 Synopsis: The story follows Dr. Joyce Richardson, a talented, yet introverted surgeon at Sinai Hospital, who is struggling with the fact that she is still single despite all her professional successes. Joyce’s strict Christian upbringing is a constant source of internal conflict for her, and limits the men she dates. However, upon a chance encounter with handsome Investor Darrin Wethington, Joyce immediately begins a whirlwind romance with the wealthy businessman and entrepreneur. It isn’t long before Joyce begins to explore her own sexual fantasies, and convinces Darrin to join her in S&M sex. This leads them into further and further exploration into this world, which is traditionally considered taboo in the conservative and upscale black community of Buckhead.

Note: The film was originally supposed to be released in February of 2017 but when I checked on March 1st, 2017, it remained unreleased with no updates on status. Now it looks like production of this film is back on. IMDB has the release date as October 12, 2018. Kiana Rene was listed in the original cast list but not in the current one. If the movie is ever released, I will check the film’s credits.