La La Anthony’s ‘The Power Playbook’ Is Heading to Lifetime

Described as an empowering guide to forging professional success, establishing financial independence, and finding balance for a satisfying life, “The Power Playbook” (published in 2015), is a follow-up/companion piece to Anthony’s “The Love Playbook.” In the work, Anthony offers up advice from the perspective of a “self-made entrepreneur with a successful fashion line, a cosmetics company, a reality show, and a budding acting career,” who came from “humble beginnings” to create a career “through sheer determination and hard work,” and now she shares her hard-won wisdom on how her readers can do the same. 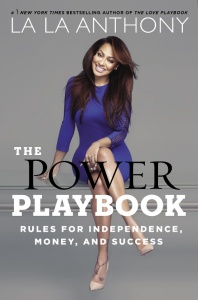 The Lifetime scripted serial adaptation will be an ensemble drama that centers on a group of women who, as the press release states, “use sports strategies to help in both their personal and professional lives. Through incredible highs and devastating lows, they stick together through life’s twists and turns.”

Latifah and her Flavor Unit partner Shakim Compere will executive produce the project with Meryl Poster, La La Anthony and Neena Beber (“Ballers”) who will also script the adaptation.

“I’m beyond thrilled to be partnering with Meryl Poster, who I’ve admired as the ultimate power player for many years,” said Anthony.

The busy Anthony is currently recurring on Starz’s “Power” drama series. She will next be seen in BET’s “The New Edition Story,” Ernest Dickerson’s next feature film “Double Play,” and as a series regular on the upcoming VH1 series adaptation of Star Jones’s “Satan’s Sisters,” which will be titled “Daytime Divas.”