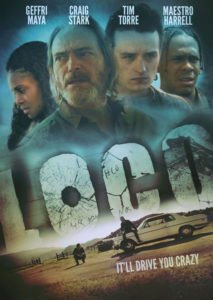 Synopsis: In “Loco,” Alex (Tim Torre), a brilliant but troubled young man is thrust into a dark underworld when he becomes a pawn in a brutal struggle between two drug lords for a new street drug called LOCO. Alex’s only hope comes from a beautiful girl, Lydia (Geffri Maya), who is also caught up in the scheme, and together they try to escape their dangerous world. A shocking surprise awaits them…because nothing is what it seems to be in the world of LOCO.

Note: I wasn’t able to identify Devin Blanks. I’m not sure if he’s the same person as the recruiter.