By Kate Thomas for MailOnline

The hit BBC detective series is back for a two-part special later this year.

And fans won’t have to wait too long since Idris Elba was spotted on set in London alongside his co-star Laura Haddock on Thursday, shooting scenes for what will be the fourth installment of the show.

The atmosphere was very light on set, with both stars sharing a giggle together in between takes.

The 42-year-old Oscar-nominated actor was casually dressed in a grey coat and jeans as he sat on a park bench next to Laura, who has joined the show in a mystery role. 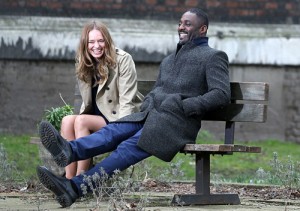 The actress cut a glum figure on the bench before Idris came along to cheer her up.

Laura – who is married to The Hunger Games hunk Sam Claflin – looked chic in a trench coat worn over a navy dress.

The Inbetweeners Movie star will also be joined by fellow newcomers Rose Leslie (Game of Thrones) and Darren Boyd (Spy) in the upcoming series.

Meanwhile, Michael Smiley (Benny Silver) and Dermot Crowley (DSU Martin Schenk) are set to return, but fans will have to wait to see if Ruth Wilson will be back as Alice Morgan.

Idris commented: ‘It’s great we’ve been able to do this Luther special.

‘John is so close to my heart, he’s part of me. The fans won’t be disappointed with his return – it’s explosive and definitely goes up a gear.’

According to Digital Spy, the new series, comprised of two hour-long episodes, will see Luther ‘pitted against his most chilling adversary yet, haunted by the ghosts of his past and hell-bent on retribution’.