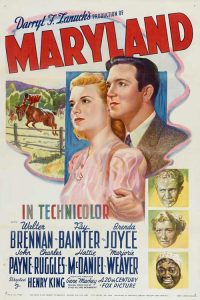 Synopsis: A woman tormented by the hunting death of her husband forbids her son to have anything to do with horses. But when he falls for the daughter of his father’s trainer, he defies his mother by entering the Maryland Hunt.

Note: I didn’t find a trailer for this film.