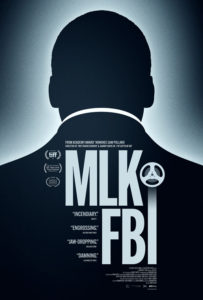 Synopsis: MLK/FBI performs the vital task of examining J. Edgar Hoover’s relentless campaign of surveillance and harassment against Martin Luther King, Jr. Today, when King is celebrated across political spectrums as a moral hero, it’s jolting to confront the years when US agents targeted him as a villain.

Inspired by the work of historian David Garrow, the film uses recently declassified files to study the FBI’s motives and methods. In the 1950s and ’60s, when Black people started mobilizing to fight racial discrimination, Hoover saw the movement as a communist plot. Rather than support equality, the FBI sought to undermine King through wiretapping and blackmail, in what former FBI director James Comey calls “the darkest part of the bureau’s history.”

Note: Premiered at TIFF on September 15, 2020 above is the theatrical release date. I will have to see the documentary to find out if the Andrew Young in this documentary is the civil rights activist.