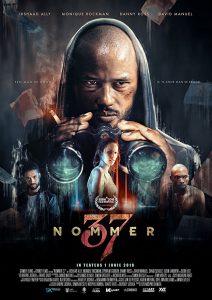 Synopsis: Entrapped in his apartment, Randal Hendricks, a recent paraplegic, is given a gift of binoculars by his devoted girlfriend, Pam. But Randal is in financial debt to Emmie, a sadistic loan shark, and when he witnesses a powerful criminal, named Lawyer, commit murder while observing his neighbours through binoculars, he initiates a treacherous blackmail scheme. Involving Warren, his halfwit friend with unabashed lust for Pam, is probably going to cost him, but with few people to turn to, Randal does it anyway and as circumstances become more complicated, Pam is embroiled in the unravelling chain of events. Before long, a detective, named Gail February comes snooping around the neighbourhood, looking for the missing corrupt cop – her partner. As Lawyer begins his own investigation in an attempt to find his blackmailer, Emmie compounds the pressure of his looming deadline, and Detective February’s investigation draws her ever closer to Randal, the wheelchair-bound Randal must rely on the physical capabilities of his reluctant girlfriend to see their plan through. With deception and greed around every corner, what follows is a thrilling ride that puts both of their lives in mortal danger.

Note: Originally a short film by the same name.