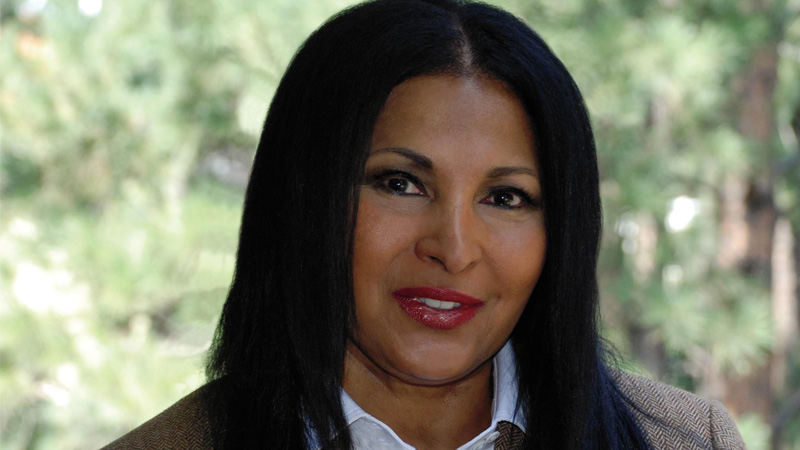 Pam Grier co-stars on the ABC comedy Bless This Mess. Speaking with reporters after the Bless This Mess panel for the Television Critics Association, Grier discussed the biopic about her life that is in the works. Given her storied career from Roger Corman movies to landmark black action heroine movies like Coffy and Foxy Brown to a career in television drama, a movie about this legend seems like a no-brainer.

Here’s what we found out from Grier about the movie, currently titled Foxy: My Life in Three Acts.

She Wants Spike Lee to Direct

Grier said she is meeting with directors to discuss the film, but her first choice is clear, if he’ll accept.

“I want to meet with Spike Lee to direct,” Grier said. “He did very, very well in Blackkklansman so I’m going to be meeting with him. I love his input on the ‘70s. It was very real. He showed a lot of things that just I’m there, I understand that. The detail of the director and the fact that he was very fair in gender, so I said, ‘I know Spike. We did Crooklyn.’ He directed me in Crooklyn a long time ago and I told him about a black klansman. He said, ‘Ain’t nobody gonna believe it.’ I said, ‘But it’s true!’”

Spike Lee is certainly a major A-list choice. He has directed acclaimed biographies before, like Malcolm X. Lee has been such a force in film since 1986, it would be great to see him make a movie about filmmaking.

The screenplay for Foxy: My Life In Three Acts was written by Bennie Richburg, whose pedigree includes producing landmark sitcoms The Fresh Prince of Bel Air, Martin and The Jamie Foxx Show. Grier wrote an autobiography, but Richburg went beyond the pages to research the script.

“He came up to Colorado, saw a mountain lion cross the road, had a heart attack,” Grier said. “He came twice and spent almost two to three years writing about my life, picking and choosing what’s cinematically interesting. Every day, what I was wearing, the song, every hour, he’s so detailed, he’s so rich. I’m so glad that he’s working on it because you need that. He sat with me. I had surgery, a dog passed away, a snow storm, mountain lion, bucks were fighting in the corral. He was scared. He was hiding.”

This would be Richburg’s first movie, although there’s no reason a television writer couldn’t make a great film. Look at Alan Ball and Charlie Kaufman.

One actor who has been cast is Jay Pharoah. He will play Richard Pryor, whose career crossed paths with Grier in the movie Greased Lightning. The two dated off screen.

This is an interesting situation where a supporting character in a biopic is just as famous as the star. In fact, there have been aborted attempts at Pryor biopics before, with Eddie Griffin and Mike Epps cast at various points. Lee Daniels was attached to direct one.

If Foxy is Grier’s life in three acts, Pryor would presumably only be in one of them,

The most important part of a Pam Grier biopic will likely be who plays Pam herself. There can be only one Pam Grier, but there are lots of talented young actors who can recreate the early years of her career.

“We don’t know yet,” Grier said about casting herself.

There are probably tons of actors in their 20s and 30s who would love to play Grier. Many say they were inspired to become actors by watching her films. Then again, it could be a great opportunity to discover a new actor, since the name of Pam Grier herself is already bankable.

It could be a situation like Straight Outta Compton or 42, giving starring roles to actors who hadn’t broken through yet. However, biopics are celebrity affairs where an acclaimed star transforms into another iconic star.

We’ll find out more when Foxy gets cast.