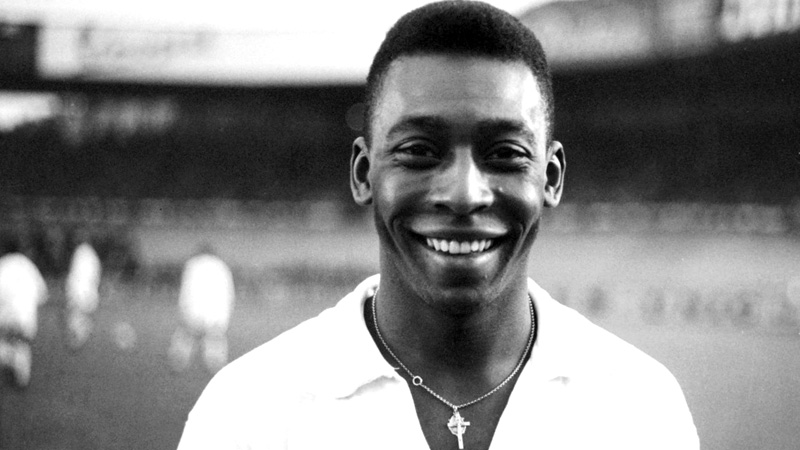 Edson Arantes do Nascimento remembered exactly when he first saw his father weep. It was 1950 and Brazil, appearing in soccer’s World Cup for the first time, had just been beaten by Uruguay.

“My father was crying with a lot of Brazilians,” the man better known as Pelé remembered. “My father used to say, men should be strong. Men doesn’t cry. Then I saw my father cry when Brazil lost the game.

“Then I told him, ‘Father, don’t worry. I’m going to win a World Cup for you.’ … [Six] years later, I was in Sweden with Brazil and Brazil won the World Cup. I was 17 years old. That was a gift from God. I don’t know why I said it, why I promised it to my father.”

Pelé, the Brazilian soccer star who led his country’s national team to that World Cup victory in 1958 and who, in the 1960s and ’70s, rivaled Muhammad Ali as the world’s most popular and recognizable athlete, died Thursday at a Sao Paulo hospital. He was 82, and had been in poor health for the last several years as he battled cancer and what the hospital described in a statement this week as “kidney and cardiac dysfunctions.”

Pelé, whose presence for a 1969 exhibition match in Nigeria led to a two-day cease-fire in that country’s bitter civil war so that both sides could see him play, became the only player to win three World Cups when Brazil was again victorious in 1962 and 1970, more than making good on his naive and youthful promise to his father.

Pelé starred for Santos, a club in his homeland and, during his career, resisted numerous offers to play in Europe, citing his loyalty to Brazil. He had planned to retire after playing his final game for Santos in 1974. But he was deeply in debt and, at the age of 35, he agreed to a $7 million contract to play the final three seasons of his professional career with the New York Cosmos of the North American Soccer League.

With Pelé as their featured attraction, the Cosmos routinely filled 80,000-seat Giants Stadium to near capacity and league-wide his presence helped boost average attendance by almost 80 percent between 1975 (7,597) and 1977 (13,584).

By force of his skill and personality, Pele is credited with igniting the slow but steady growth of soccer — “the beautiful game,” as he called it — in the United States.

“It really was ludicrous to think that Pelé, the greatest player of all, was going to end up playing for this ridiculous little team in New York drawing 1,500 people,” said Clive Toye, the Cosmos general manager. “But I told him don’t go to Italy, don’t go to Spain, all you can do is win a championship. Come to the US and you can win a country.”

Edson Arantes do Nascimento was born on Oct. 23, 1940, to Dondinho and Dona Celeste in the down-and-out town of Tres Coracoes in southeastern Brazil. His father was a local soccer player and young Edson — at first nicknamed Dico — began playing futbol with a wad of newspapers crumpled inside a sock.

Soon he was better at the game than all the other neighborhood kids and they gave him the nickname Pelé for reasons that remain unclear, since the word meant nothing in his native Portuguese. Thinking it was an insult, Pelé at first didn’t care for the name, but it stuck.

He began to make a name for himself with the Bauru Athletic Club, where he was noticed by Valdemar de Brito, a former World Cup player, who brought him to the attention of Santos, a local club team. In his first full season, Pelé scored a league-leading 32 goals and it wasn’t long before he was selected for Brazil’s 1958 World Cup team. He was 17.

Pelé missed the first two games of the tournament in Sweden with a knee injury, but returned to score the game-winning goal in the quarterfinals. He added a hat trick in the semifinals and two goals in Brazil’s 5-2 final victory over the host team.

The prodigy’s heroics coincided with the first international telecast of the World Cup. Pelé became a household name around the globe.

Brazil would win the World Cup again in 1962 and, after the defending champions suffered a devastating loss during group play and were eliminated during the 1966 Cup in England, Pelé, although still in his prime, announced that he had played in his last World Cup.

That stance didn’t sit well with his countrymen or with Brazil’s President Emilio Medici and word made its way to Pelé that he might want to reconsider. The country had been in a state of upheaval for many years and the ruthless Medici, one of a string of despots who controlled the country from 1964 to 1978, was known to imprison and/or torture anyone who crossed him. It would just be better for everyone if Pelé laced up his cleats one more time for the motherland.

Pelé, who considered himself neutral politically, had already received criticism for an earlier meeting with Medici.

“I don’t think I could have done anything different,” he said in the documentary. “It wasn’t possible. … I’m Brazilian. I want what is best for my country. I’m not Superman. I don’t work miracles.

“I was just a normal person who was granted the gift of being a futbol player. But I am absolutely certain that I have done much more for Brazil through futbol in my own way than many politicians who are paid to do so have done.”

So Pelé, now 29, played in 1970 in Mexico and Brazil defeated Italy, 4-1, in the final with Pelé scoring the game’s first goal.

Pelé would sign with the Cosmos in 1975, bringing a measure of credibility to the 7-year-old league. At the time, his three-year, $7 million contract made him the highest-paid team athlete in the world. He had retired from soccer the previous year and his decision to return to the pitch in the US upset his countrymen, since he had been emphatic about never playing again and had sat out the 1974 World Cup.

He retired — this time for good — after leading the Cosmos to the 1977 NASL championship, although he did return for an exhibition match later that year versus Santos, his old club team. Pelé played the first half of that game for the Cosmos and the second half for Santos. He finished his career with 1,283 goals in 1,367 games.

Pelé, who held the title of Brazil’s minister of sport, spent many of his years after retirement serving as an ambassador for the game he loved, his worldwide fame continuing long after he had played his last game.