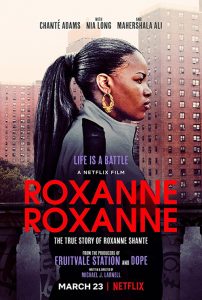 Synopsis: In the early 1980s, the most feared battle emcee in Queens, New York, was a fierce teenage girl with the weight of the world on her shoulders. At the age of 14, Lolita “Roxanne Shanté” Gooden was well on her way to becoming a hip-hop legend as she hustled to provide for her family while defending herself from the dangers of the streets of the Queensbridge Projects in NYC.