Saycon Sengbloh Can Act and Sing, But Can She Ever Rest?

The Tony-Nominated Actress Talks Theater, Music, and Enjoying the Ride

Saycon Sengbloh is giving you a master class in pitch and dialect.

“Every accent has a different kind of pitch,” she explains, “there is a coloring and melody with each accent.”

She demonstrates by pulling up the accent of her hometown, College Park, Ga. The ATL, if you need a larger destination point. Sengbloh slides into a curve of words that make you feel like you are eating pancakes at the Waffle House. Then her syllables dart up as she gives you a Jamaican accent. It is no doubt the one she used playing “Rita” in the musical “Marley.”

“I am very sensitive to sound,” she says, explaining that sometimes she has to nix the air conditioner in her apartment because the noise is so disruptive. “I’ll be hot as hell, but I have to turn it off.”

Ms. Sengbloh plays around with a few more accents and then at last she offers it up: The linguistic pop of the tongue as she recalls a Liberian accent, much like her character “Helena” in the Broadway hit “Eclipsed.”

It is then that you remember.

This is the voice that won over audience after audience this past year.

This is the woman whose name is listed as a Tony nominee for Best Performance By An Actress In A Featured Role In A Play.

Oh, wait. The Tonys. That little awards show watched by about 6.4 million viewers last year. This year the ceremony is expected to bring in lots more viewers partly because of a heavy dash of diversity, seasoned in the usually salt flavored Broadway stew. There were at least 12 black actors/actresses nominated this year, and a slew of other black creatives like directors and costume designers. None, any, or all could be winners.

It’s five days before this historical night. Five days before (arguably) one of the biggest moments in Ms. Sengbloh’s career. How the hell is she so calm? You don’t want to be the reporter with the clichéd questions. But you have to ask, how does it feel?

“It’s quite thrilling, and I am very appreciative,” the actress/singer says of her nomination. Then she stops for a moment. And then continues.

“The difference between being asked this question now and other times is before I’d be out picking flowers and someone would ask ‘how does it feel to be nominated’ and I’d be like, what? And now that I can pontificate on it – it is thrilling.”

She stresses the word “pontificate” and you realize this woman is not only a great performer but has a great sense of humor. Then she adds, “In the end, though, every day you get on stage and you still have to do the show. It’s about the work.”

It’s this work that won her the Drama Desk award for Outstanding Featured Actress In A Play earlier this month. And though Sengbloh admits she is just an actress trying to “hustle” she does take stock in what the accolades all mean, and their impact on her career.

“Now that I’ve won the Drama Desk I see how inspiring it is to people,” she says. “I thought that people knew who I was, it’s lovely that they are discovering me this way.”

By “this way” Ms. Sengbloh means that interesting and lazy (reporter’s commentary) habit reporters have of putting all women they have not heard of in the ingénue category. But like most journeys, where we pick up on a story is not usually where the story begins.

You have to listen to “Southern Pin-Up,” Ms. Sengbloh’s debut album which was released independently in 2008. On it you hear the vocal prowess and genre bending sound that is Sengbloh. Her voice is at once soft and powerful. The lyrics both yearning and earnest for a connection to this big world. The sound is a product of a woman born to wear many hats:

It is all in this album. It is R&B with all the drama that musical theater provides. When you listen you realize that Sengbloh had to go to New York. You bring up the album.

“That was almost ten years ago,” Sengbloh groans the same way you would when someone pulls out your old yearbooks and compliments you on your bamboo earrings and asymmetrical bob. She suggests other songs, newer ones. And they are also very beautiful. “Warrior,” a house groove complete with wispy vocals and a banging beat, that you play at the gym. Then there is “Everything” a rock mid-tempo ditty that reminds you of Jennifer Hudson channeling Donna Summer. It is infectious, fun and danceable.

“I was sort of wanting to be in this pop world and also this hip-hop world,” she says of her music back then. “I now write more rhythm and blues. I would use Prince and Tina Turner as really good examples. They can have this soulful rock sound.”

And indeed “Everything” is powerful. You comment on her strong voice.

“As my voice matured I began to have more power and range. I went to a performing arts high school and I had more of the sweet voice, the Deena Jones of Dreamgirls. (This was pre-Bey rendition) But my belt became a lot stronger.”

But “Southern Pin-Up” is a blueprint to Sengbloh’s own philosophy on her road to success – a girl just keeping it real. Her southern roots come through like the “Sweet” in sweet tea. It is that history and upbringing that has kept her grounded as she made her way to NYC to pursue her dreams.

“It’s a part of everything that I am,” Sengbloh says of her past. “It’s made me extremely polite and tolerable. I can be quite diplomatic and calm sometimes. And I have to control my emotions for my career. Like I might hear some bad news right before an interview; it must go well, so I have to hold them in check; and the second I get out of there I cry.”

But do not underestimate her.

“I have a sweet face and it may make people take my kindness for weakness. But I have to be firm at times.”

It is this determination, talent and charm that no doubt landed her several roles on stage, first at the Alliance Theater in Atlanta, but soon regional roles, touring gigs, and finally Broadway performances like “Rent,” “Aida,” “Wicked” and “The Color Purple” just to name a few.

This is where another point of confusion comes in – as most people believe Sengbloh is known more for her singing than her acting.

“All those things I do – albums, concerts, have been funded by my acting,” Sengbloh says. ‘I enjoy singing and understand how to produce a show. But it is quite expensive.”

It was thinking about these expenses – of singing and living in New York – that Sengbloh had an epiphany.

“How bout I not focus on my music,” she says, “And then I did this play. [‘Eclipsed.’ Yeah – we will get there]. And all kinds of cool offers came in between. God is showing me there is an ease to life as a result of me nurturing something that I always wanted to do. So to be nominated for a Tony in the season I dedicated to focusing on my acting is amazing.” 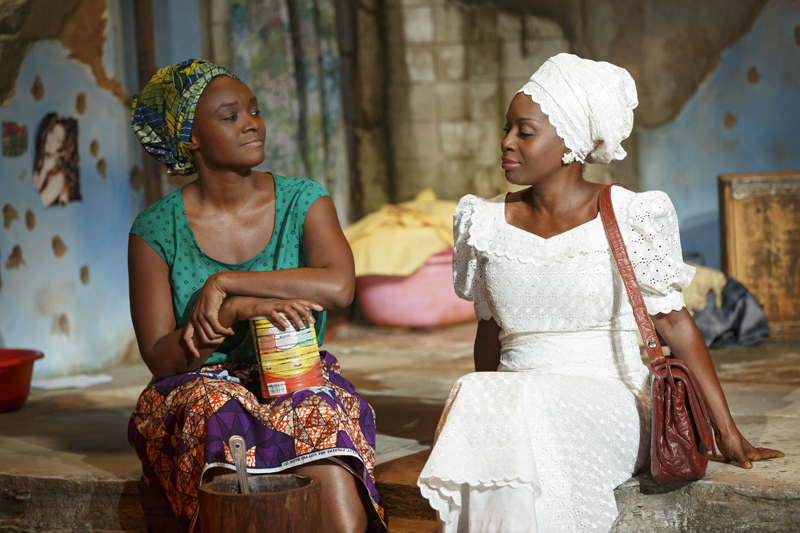 Speaking of amazing, “Eclipsed” is just that. And not in the Ohmygodthisyogurtisamazing sort of way. It is amazing in the sit down and cry through intermission sort of way.

People without Internet or cave dwellers:

“Eclipsed” is the story of five Liberian women and the choices they have to make. It was written by Danai Gurira (of “The Walking Dead” fame) and also stars Oscar winner Lupita Nyong’o. It started out as a labor of love at the Public Theater and morphed into a Broadway behemoth pulling in six Tony nominations this year.

One of them is for Sengbloh’s performance of Helena.

But not that long ago it was just words on a page.

“When I first read the play the words were in this dialect and I said ‘wait’ is this West African?” She says recalling. “And I was like ‘what?’ – a play about Liberian women. This is good and I want to be a part of this.”

The problem was Sengbloh was on her way to audition for a TV show, Brandy’s “Zoe Ever After.”

“I remember thinking, this is some heavy duty language. When will I be able to focus on this?”

That moment came on the plane ride back to New York. But there was another switch; originally she was auditioning for a different role but they asked her to read for another. “I was hearing the Helena character. It really rang true.”

As the journey of “Eclipsed” garnered media attention, and critics fell in love with the show, another thing happened. The show made history with a cast, crew and director who are all female and black. This means something in the #OscarsSoWhite world we live in where the subject of diversity seems to only be discussed AFTER the nominations are announced. Oh my gosh we’re not diverse – really?

Can’t say that this year though. Thankfully. And though Sengbloh is happy to be making all kinds of historic moves, she admits a lot of the accolades took time to metabolize.

“Initially I didn’t think about that,” she says. “I thought ‘wow’ it’s a great story. Then I started thinking, that’s so cool.”

“Women tend to multi-task; one hand is on the frying pan, the other is typing a report for work, while the leg is pushing a broom. But when you have multiple women multitasking it can make for a higher level of functionality. And the shorthand is there – the shorthand of women of the African Diaspora which made it wonderful.”

Like any true actress Sengbloh is keeping her mind on her next project, which will be “Double Play,” a movie based on the Caribbean novelist Frank Martinus Arion’s book of the same name. The project is directed by the acclaimed director Ernest Dickerson (director of many amazing shows like “The Wire” and “TWD” and the movie “Juice,” and produced by Lisa Cortes of “Precious” fame).

Sengbloh was so excited about playing in the movie and the chance to play “Nora” that she wrote both Dickerson and Cortes personal letters.

“I put clips, pictures and said let me tell you why I am Nora. About two days later Lisa [Cortes] said she got the email and was looking forward to my audition.”

That risk taking and hustle got her the part. The movie wrapped recently and Sengbloh is trying hard to take in this historical moment that is coming up this Sunday.

“The advice I keep getting is enjoy the ride,” Sengbloh laughs, “I think that is good advice. The American sensibility is one of overwork and stress. But it is a lot easier said than done. I am in New York and trying to hustle.”

Something tells you, Ms. Sengbloh will not be relaxing for long.

George Kevin Jordan is a freelance reporter and author with way too many first names. He writes about theater, race, and politics and anything else that may give him ice-cream headaches.