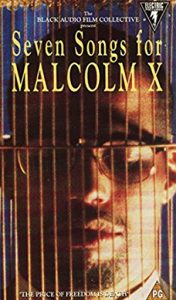 Synopsis: Seven Songs for Malcolm X is a British documentary film about the life of Malcolm X, the influential civil rights activist who was assassinated in 1965.

The film pays homage to the life and the legacy of the African-American activist Malcolm X through a series of narrations and dramatic reenactments. The narrations are conducted by members of Malcolm X’s family, former aides, eyewitnesses, scholars of history, social analysts and quotations from Malcolm X’s autobiography.

Note: Premiered at the Toronto Film Festival in 1993. I could not distinguish the characters in the film known as Malcolm’s men (Danny Carter, Martin Boothe, Edward George) or the girls (Tiffany Nelson, Tiffany Tate).