by Ross A. Lincoln | Deadline Hollywood

Funk, soul and R&B singer Sharon Jones, lead singer of the revivalist funk band Sharon Jones & The Dap-Kings, has died following a battle with pancreatic cancer. She was 60.  Nominated for a Grammy in 2014 , the next year Jones was the subject of the Barbara Koppel-directed documentary Miss Sharon Jones! which debuted at Toronto.

“We are deeply saddened to announce Sharon Jones passed away today after a heroic battle against pancreatic cancer. She was surrounded by her loved ones, including the Dap-Kings,” said a message posted today to Jones’ Facebook page. “Thank you for your prayers and thoughts during this difficult time.”

Long acclaimed for her powerful voice and seemingly limitless energy while performing, Jones came to fame late in life. Born in South Carolina and raised in Brooklyn, she was regular gospel church singer from a young age, and soon after high school began what would be a two-decades long effort to establish her singing career. Performing in talent shows and as a backup and session singer beginning in the 1970s, she was never able to secure a deal as a solo singer, and as a result spent many years working in security and law enforcement, including time as a corrections officer at Riker’s Island prison.

Her big break finally came at age 40, when she appeared as a backup singer on a session with deep funk artist Lee Fields. Session organizers Gabriel Roth and Philip Lehman were so impressed by her that the recorded two solo tracks, released later that year by Roth and Lehman’s label Pure Records. Over the next 6 years, Jones developed her sound, working closely with Lehman and Roth as well as the musicians that would eventually make up the Dap-Kings. Several solo singles were released, bringing Jones to the attention of collectors and DJs, many of whom mistakenly assumed her recordings were early 1970s originals. 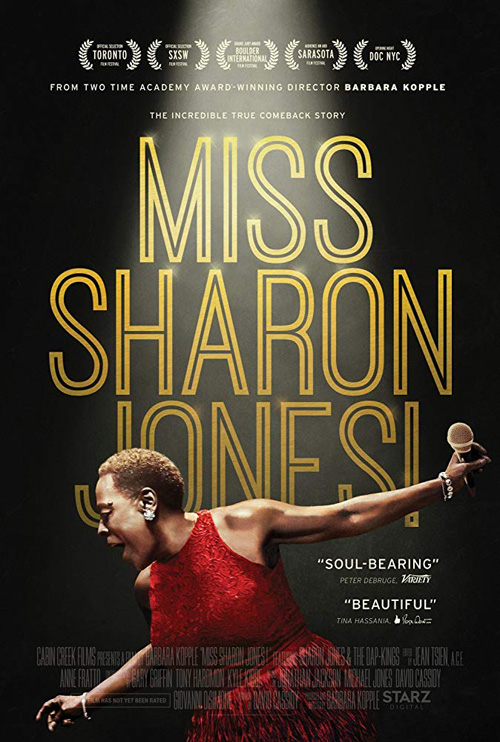 Jones released her first album, “Dap Dippin’ with Sharon Jones and the Dap-Kings”, in 2002. 4 more albums of original music followed, most recently “Give the People What They Want”, nominated in 2014 for Best R&B album. Each notable for further developing her authentic, 70s-focused style, the recordings cemented Jones and the Dap-Kings’ reputation as leaders of the classic funk and soul revival movement.

Jones and the Dap-Kings were musicians-musicians, frequently cited by more famous artists as a favorite and often working alongside them, among them Lou Reed, and David Byrne & Fatboy Slim.

Though Jones never pursued an acting career, she had two notable roles. In 2007 she portrayed a juke joint singer in the Denzel Washington Film The Great Debaters, and in 2016 she and the Dap-Kings, in one of the show’s best moments, were featured performing in the Harlem night club owned by Cottonmouth in Luke Cage. Their song “100 Days, 100 Nights” was also featured in the final scenes of the season.

Jones was diagnosed in 2013 with bile duct cancer, a diagnosis that was later changed to stage 2 pancreatic cancer. She underwent surgery and chemotherapy and managed to recover for a time, but at the premiere of Miss Sharon Jones at the 2015 Toronto International Film Festival, she announced that her cancer had returned. She continued to work for a time even after restarting chemotherapy.

In lieu of flowers, Jones’ survivors have requested donations be made to Cure Pancreatic Cancer – The Lustgarten Foundation, James Brown Family Foundation, and Little Kids Rock