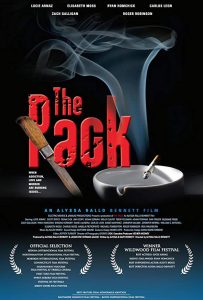 Synopsis: Twelve Angry Men meets Silkwood in a suspenseful feature inspired by true stories. An ambitious Assistant District Attorney prosecutes a wife and mother for murder after her forty-seven year-old husband dies of lung cancer. Their twenty-four year-old son decides to testify against her. At first, this appears to be a ridiculous case, but one juror’s doubts and inspirations – a student of hers force the jury into an intriguing, emotional and complicated choice regarding addiction, loyalty and individual responsibility.

Note: Original Title “The Pack”. IMDB seems to have William Mitchell listed twice under William Mitchell and William Charles Mitchell. But looking at the actors image on the Criminal Minds Wiki and comparing it to Judge Oppenheimer in the above trailer, you can see that it is the same person.