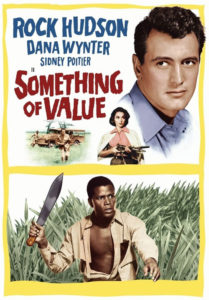 Synopsis: Although Peter and Kimani grew up together, Kimani soon finds that different races are treated differently. After Kimani’s father is jailed for following tribal customs, Kimani joins a band of rebels that wants all non-Kenyans out of their country. While Kimani believes in the cause, he does not agree with the indiscriminate killing of women, children, and those who will not join or agree with them. Even after the Mau Mau murder his little sister and brother, Peter still believes that there is a chance for peaceful co-existence and that he can stop most of the killing if he can reason with Kimani.

Note: I need to watch the film. I wasn’t able to identify Naaman Brown, Barbara Foley or Carl Christian.