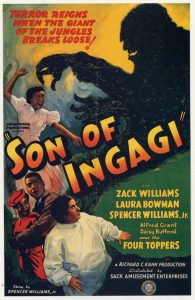 Synopsis: Son of Ingagi is the first science fiction-horror film to feature an all-black cast. The film is about Eleanor and Bob Lindsay inheriting the house of Dr. Helen Jackson, who had just returned from her trip to Africa. Jackson also had returned with a missing link monster named Ingina (a.k.a. N’Gina) as well as African gold. When Ingina drinks the doctor’s potion, it puts him into a rage that makes him murder Dr.Jackson. The Lindsay family inherits Jackson’s house where they soon find the presence of the monster. Son of Ingagi was written by Spencer Williams based on his own short story House of Horror. The production company was impressed with Williams’ script and allowed him to direct and write his own feature film The Blood of Jesus in 1941.