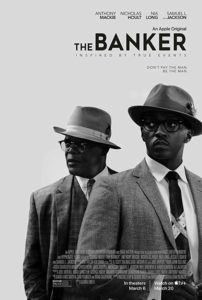 Synopsis: The drama is based on the true story of two African American entrepreneurs, Bernard Garrett (Mackie) and Joe Morris (Jackson), who during the 1950’s tried to circumvent the racial limitations of the era and take on the establishment by recruiting a working class white man, Matt Steiner (Hoult) and training him to pose as the head of their business empire while they posed as a janitor and a chauffeur. Bernard’s wife Eunice (Nia Long), plays a key role in setting up the enterprise. Garrett and Morris become two of the wealthiest and most successful real estate owners in the country with Steiner as their front man, but their success brings about unforeseen risk of exposure that threatens everything. READ REVIEW

Note: This film is complete and was set to premier at the AFI Fest on December 6, 2019 but was pulled from Apple TV release schedule because of accusations unrelated to the film. Above is the new Apple Streaming Service release date.