The Black Press: Soldiers Without Swords (1999) 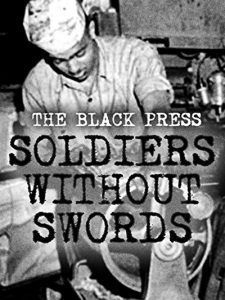 Synopsis: THE BLACK PRESS: SOLDIERS WITHOUT SWORDS, highlights a powerful and engaging account of American history that has been virtually forgotten: the story of the pioneering black newspapermen and women who gave voice to black America.

From facilitating the migration of Southern Blacks to northern cities to honoring Black soldiers in World War II, the Black press documented people who were otherwise ignored. SOLDIERS WITHOUT SWORDS weaves music by Grammy award-winning jazz artist Ron Carter with archival footage, photographs and interviews with editors, photographers and journalists of the Black Press.

The film is narrated by stage, screen and television actor Joe Morton. Several of the key reporters, publishers and photo journalists of the black press were interviewed for the film shortly before their deaths, including one of the last on camera interviews with John Sengstacke, publisher of the only daily black newspaper still in production, the Chicago Defender; and with the late Charles “Teenie” Harris, retired staff photographer with the Pittsburgh Courier.