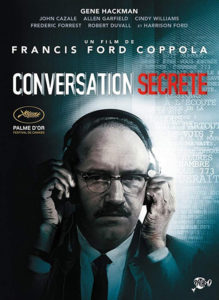 Synopsis: Harry Caul is a surveillance expert who can bug people at anytime and anywhere. Living in a isolated world, his business is his work. One day, he records a young couple, having a conversation in a park in San Francisco. When he finally is able to pierced together the entire recording, he soon realizes that there’s something definitely with this couple’s conversation, Fearing that they are being targeted by someone who wants them dead, Caul races against time to figured out the truth before the couple get assassinated by whoever is behind this murder plot. As his investigation leads him deeper to the revelation, his relationship with fellow colleague, who he works for, and his closest friends started to deteriorate. Soon, Caul find himself entrapped in a world where the truth is far more deceiving than what it seems to be.

Note: Rialto Pictures is bringing Francis Ford Coppola’s Palme d’Or winning 1974 movie The Conversation back to theaters, starting March 20 at New York’s Film Forum and Landmark’s Nuart Theatre in L.A., with newly struck 35mm prints personally supervised by the six-time Oscar winning filmmaker. Billy Dee Williams is only on the screen for a few moments and has no speaking lines.