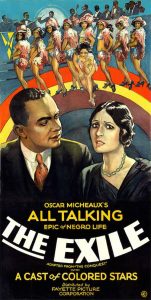 Synopsis: The story begins in Chicago, where Edith Duval (Eunice Brooks) has become a power in the African American community, largely because she came into possession of a South Chicago mansion where she used to be a servant: the white family that owned the mansion abandoned it when blacks started moving into the neighborhood. She is in love with Baptiste, and at first it seems like they may be a match, but she rejects his idealism and he her cynicism: she wants to turn the mansion into a speakeasy and nightclub.

Baptiste, instead, buys land in South Dakota and becomes a successful rancher. Five years into his time there, he falls in love with young Agnes Stewart (Nora Newsome), and she with him. He considers the situation hopeless, though, because she is white. The audience has already been cued in that he may be wrong about that: when she first heard about him, and it is mentioned to her that he is a “Negro”, she conjectures on how light or dark he may be, with words to the effect that “some Negroes are no darker than my mother — although with no sign of her ever having questioned her late mother’s racial identity, or her own. Further, her father has demurred from another rancher’s racist remark, quoting Robert Burns, “A Man’s A Man for A’ That”.

Fleeing back to Chicago to escape his supposedly doomed relationship, the previously teetotaling Baptiste returns to Edith’s club, her liquor, and her charms. They plan to marry, but her former lover, an Ethiopian named Jango (Carl Mahon) appears on the scene, sneaks into Edith’s room and complains of how she has ruined him. He threatens suicide; she hands him a gun as a gesture of contempt. Instead of killing himself, however, he kills her. Baptiste is initially suspected of the murder, but is cleared.

Meanwhile, Agnes’s father, discovering that Baptiste has fled, tells her about her own background. Earlier in the film, there has been reference to the one-drop rule: it is clear that in the time’s (and Micheaux’s) conception of race, this defines her as black. She takes a train to Chicago, where she and Baptiste are reunited; they marry and return to South Dakota.

Note: I couldn’t find a trailer for this movie. Above is a clip from the film.