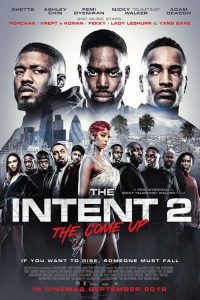 Synopsis: THE INTENT 2: THE COME UP centres on Jay (Ghetts) who has big dreams; but his ambitions are crippled by his allegiance to both his crew and Hackney crime boss Beverley (Sharon Duncan-Brewster). Jay sets about laying the foundations for his own organised crime ring with the help of Mustafa (Adam Deacon). Things are going well until Beverley discovers his disloyalty, and an ill-fated robbery in North London and a trip to Jamaica tears the crew apart. All the while, their actions are being monitored by an undercover Met Police officer Gunz (Dylan Duffus), who has been deployed to integrate himself into the crew.

Note: Title changed from “The Come Up (2018)” to “The Intent 2: The Come Up”. Prequel the the successful 2016 film “The Intent”. Casyo Johnson was in the original cast list but does not appear in the final cast list or the film’s cast list.