The Killing of Kenneth Chamberlain (2019) 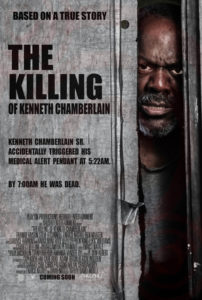 Synopsis: Based on the true story of the events that led to the death of Kenneth Chamberlain Sr., an elderly African American veteran with bipolar disorder, who was killed during a conflict with police officers who were dispatched to check on him.

Note: Premiered at the Austin Film Festival in 2019.