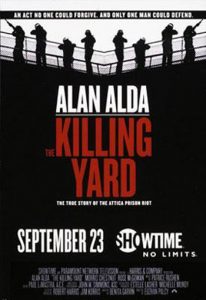 Synopsis: 1971, protesting the dreadful conditions at the state penitentiary, 1200 inmates — mostly African-American — takes control of Prison Yard D. After a half a week negotiating with the prisoners, the police burst into the jail with guns ablaze. Reportedly 2,200 rounds are fired, 39 people killed, and 80 wounded. Fearing an investigation, the State Department indicts a number of prisoners for murder, including Shango Bahati Kakawama, also known as Bernard Stroble, a former law student and activist against the prison administration. Crack lawyer Ernie Goodman agrees to defend him, but before he can keep him from the gallows he has to allay Shango’s distrust. Meanwhile, civil liberties activist Linda Borus uncovers the truth and the elaborate layers of deceit that the state erected.