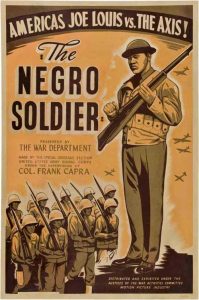 Synopsis: The Negro Soldier is a 1944 documentary created by Frank Capra for the United States Army during World War II. The film was produced by Frank Capra as a follow up to his successful film series Why We Fight. The army used this film as propaganda to convince Black Americans to enlist in the army and fight in the war.

Note: I don’t usually post the cast list with character names but the above cast list was pieced together from the film and the IMDB cast list, so I included the character names. IMDB says the film was first released in February 1944 but it only had the month and the year so I went with the April release date.