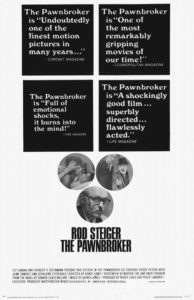 Synopsis: In a poor neighborhood of New York, the bitter and lonely Jewish pawnbroker Sol Nazerman is a survivor from Auschwitz that has no emotions or feelings. Sol lost his dearest family and friends in the war and his faith in God and belief in mankind. Now he only cares for money and is haunted by daydreams, actually flashbacks from the period of the concentration camp. Sol’s assistant is the ambitious Latino Jesus Ortiz, who wants to learn with Sol how to run a business of his own. When Sol realizes that the obscure laundry business he has with the powerful gangster Rodriguez comes also from brothels, Sol recalls the fate of his beloved wife in the concentration camp and has a nervous breakdown. His attitude leads Jesus Ortiz to tragedy and Sol finds a way to cry.