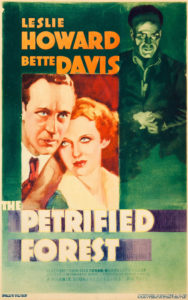 Synopsis: Gabby lives and works at her dads small diner out in the desert. She can’t stand it and wants to go and live with her mother in France. Along comes Alan, a broke man with no will to live, who is traveling to see the pacific, and maybe to drown in it. Meanwhile Duke Mantee a notorious killer and his gang is heading towards the diner where Mantee plan on meeting up with his girl.