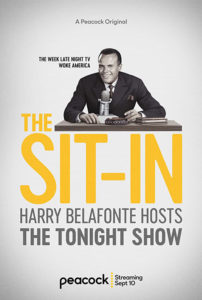 Synopsis: While the country was embroiled in a divisive election with racial tensions flaring, Civil Rights activist and trailblazing performer Harry Belafonte guest hosted The Tonight Show for one week in 1968. By then, Johnny Carson had turned this pioneering late night show into one of the most powerful platforms of communication. In an unprecedented move, Belafonte took a predominantly white institution, The Tonight Show, and transformed it into a multicultural and political experience.

Note: I would have to see the film to get a full list of the participants. The above cast list is compiled from different articles I read about the historic event. Currently IMDB only lists Harry Belafonte and Whoopi Goldberg. This documentary missed its release date. It was suppose to premiere at the Tribeca Film Festival on April 15, 2020 . Above is the Peacock premiere date. I need to find which Valerie Thomas was a writer on this project.