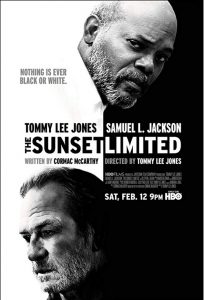 Synopsis: Two men in an apartment with their opposing beliefs in this play by Cormac McCarthey. The black guy, a former convict who believes in God, just saved the white agnostic professor from jumping in front of the express train. He won’t let the depressed man leave, without following him, and feel he’s in this situation for a reason, decided by God. An intense chamber play about belief or unbelief, and a conversation about what’s true and important in life, or not.