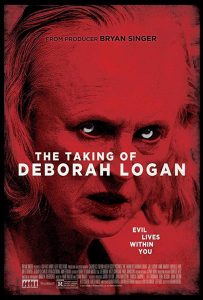 Synopsis: What starts as a poignant medical documentary about Deborah Logan’s descent into Alzheimer’s disease and her daughter’s struggles as caregiver degenerates into a maddening portrayal of dementia at its most frightening, as hair-raising events begin to plague the family and crew and an unspeakable malevolence threatens to tear the very fabric of sanity from them all.