Tracy Oliver talks about writing for Black women and being committed

Aramide A Tinubu | Shadow and Act

Tracy Oliver knew that she had something special when she and Black-ish creator Kenya Barris finished the script for Girls Trip. “I’m not shocked,” she explained to me referring to the massive success of the film. “I knew what we were making. I was on set. Everyone just put together the film, including the cast — every part of it was so magical. I was like, ‘This is going to do well.’ What I didn’t know was that it was going to break records. I didn’t know that it was going to make over $100 million domestic. That’s really, really rare, and really hard to do. There are movies with all white casts that are not hitting $100 million.”

The South Carolina native has spent her career writing for and about Black women — and she’s not about to apologize for it. Like many of us –in the ‘90s Oliver was enraptured by all of the multifaceted stories of Black women that were available to us on television and in film, from Living Single to Love & Basketball. However, by the time the 31-year old hit her twenties – Black people had all but disappeared from the big and small screens. “I was really spoiled. Like a lot of people that grew up in the ’90s, we had so much on television,“ Oliver said wistfully. “Then on the movie side, I loved Love & Basketball, Love Jones, The Best Man — those were my favorite things when I was growing up.”

In a moment it seemed like a switch had been flipped – all of these gorgeously textured stories simply vanished. “I can’t tell you why people started believing that there wasn’t an audience for Black content,” the Survivor’s Remorse scribe reflected. “I don’t know what the breaking point was, where Hollywood decided no more movies other than Tyler Perry. For almost a decade, there was nothing but Madea. I think that was really a bleak period for a lot of artists of color because it was like, that’s fine an audience, but there’s so much more to Black people and Black lives that we’re not showcasing and not sharing with the world. I’m not really sure why that happened.”

During that time—Oliver was headed to Stanford University. An artist to her core, the actress, writer, and producer was quickly typecast. “I was basically getting cast as some version of Rizzo in Grease in everything, “ she said laughing. “I was always the cigarette-smoking, cool Black girl and I was like, ‘All right, we’re done.'” It was her mother who prompted the Stanford alum to stop complaining about her lack of opportunities and actually do something about it. “My mom is just not one of those people that is here for any complaining,” Oliver quipped. “She was like, ‘Well, aren’t you at school? Can’t you just learn how to write? If you don’t like something, then you figure out how to change it. As long as you’re auditioning for other people, that’s what they’re going to do. They don’t have any obligation to cast you as anything other than how they see you.’”

The 31-year old took that advice to heart and she and her classmate Issa Rae teamed up to write and produce the acclaimed web series, The Mis-Adventures of an Awkward Black Girl. Oliver starred as Issa’s mean girl co-worker J on the show. It was writing that really sparked something in Oliver. “I really enjoyed the power and the creative freedom of directing and writing, more so than just performing because there’s so much control that I have on this side of things that I didn’t have when I was just a performer,” she reflected.

With Shonda Rhimes’ Scandal kicking down doors for Black people – specifically women in drama at the time and Awkward Black Girl doing the same thing for comedy – an insatiable thirst for even more content was birthed. “People were so hungry for it, “ Oliver explained to me. “But we had no idea that it was going to be this movement that it became. I’m crossing my fingers every day that this isn’t a moment, that we can sustain this. We’re definitely back in this period, luckily, where a lot of us are doing a lot of cool things in different mediums, and it’s 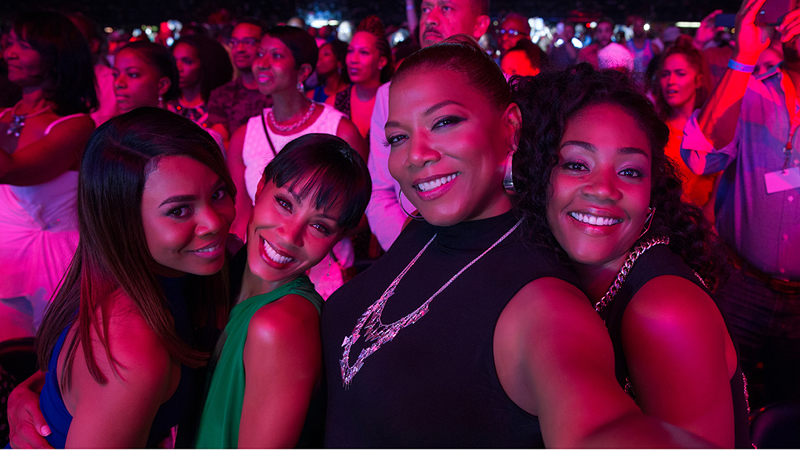 After college, Oliver connected with Barris on a show that never aired. She was brought in for the writer’s room, and he remembered her

when he was called to write, Barbershop: The Next Cut. “Everything happens for a reason,” Oliver reflected. As they were finishing up Barbershop, she heard about Girls Trip. “I really, really, really wanted that movie, “ Oliver remembered. “I told everybody, I was like, ‘I was born to write that movie. If I don’t get it, I’m going to be really upset.’ I was like I have to have because it was so true to who I am as a Black woman. These opportunities never come up, and I was really adamant that I get an opportunity to go out for it. I partnered with Kenya again, and we pitched against a couple of other writers, and luckily, we were hired.“

Oliver gets her inspiration for her characters from watching other people – especially her close friends. Authenticity like that doesn’t simply materialize out of thin air. “Every character in Girls Trip was drawn from either myself or my friends, “ she laughed. “When my friends were watching the movie, they were like, ‘You’re wrong as hell for putting that in this movie.’ It was a lot of personal stories of things that have happened with too much alcohol over the years that I was like, ‘I’m definitely going to throw this in this movie.’ Even with crafting television scripts, and whatever I’m working on, it’s always drawn from personal stuff. I think that’s why the one thing that I hear about my writing a lot, is that the people feel real.”

Girls Trip has put Oliver on the map in a way that she hadn’t been previously. She was just tapped to write a television series based on the iconic film First Wives Club – and of course, Black women will be at the center. “I mean it’s still a grind, in the sense of you have to work for everything, “ she revealed. “I still work as hard, if not harder, than I always did, but the opportunities are coming a lot quicker than they used to. I’m finding a lot more trust and respect when I go into a room. It used to be you have to really convince people to take a chance on doing something with Black women in it. Now, because of Girls Trip, it’s a lot easier to say, even with First Wives, ‘I want to do this, but I want to do it with Black women.'”

It’s certainly an exciting time. With technology at our fingertips and some really dope material — you don’t need Hollywood bigwigs to get your stories to an audience. For any burgeoning artist who are ready to make a mark in the world, Oliver’s advice boils down to doing the work. “ don’t want to go through the hard journey to get there, “ she said. “I think sometimes people look at what I’m doing, and then they say, ‘Oh, I can do that.’ What they don’t see is that Girls Trip had 17 drafts and it was a year and a half of my life — 17 drafts. I was doing this while also working full-time on another show, so I didn’t have nights and weekends for a long time, and I looked crazy for a lot of that year. All you see is the red carpet photos and the press at the end, and you’re like, ‘Oh, I want to do that.'”

Oliver has had an outstanding year – but her success certainly hasn’t come easy. “You have to be committed to the dark side of the business, too, “ she told me. “Which is a lot of nights of little or no sleep, dealing with a lot of egos, and working hard and taking criticism and taking rejection every single day. A lot of it is really hard and is not for people that are thin-skinned at all.” Still, as we’ve seen with this screenwriter’s flourishing career – if you can stick it out, the payoff will be nothing less than magnificent.