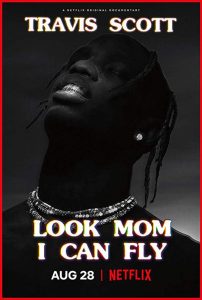 Synopsis: Travis Scott: Look Mom I Can Fly straps viewers into a front-row seat of Scott’s life in the months surrounding the release of his Grammy-nominated album Astroworld. Intercut with footage from his live shows and nostalgic home video footage from Scott’s childhood, this documentary follows Travis’ life-changing moments, including becoming a father, performing at the Super Bowl and recreating Astroworld for his hometown and fans.