We Need to Talk About Cosby

W. Kamau Bell expected Bill Cosby to respond to the four-part Showtime docuseries that Bell has produced about the pioneering but now disgraced entertainer. But Bell was surprised by how Cosby chose to comment following the Jan. 22 Sundance Film Festival premiere of “We Need to Talk About Cosby.”

“On the list of things I thought he would call me, ‘PR Hack’ did not make my list,” says Bell, a stand-up comic and host of the CNN series “The United Shades of America” who began working on the docuseries in 2019. “So, I guess I give him credit for originality.”

“We Need to Talk About Cosby,” which debuts on Showtime Jan. 30, examines the comedian’s life, work and legacy in the wake of accusations of rape, drug-facilitated sexual assault and sexual battery by more than 60 women. Through interviews with commentators and through his own voice-over, Bell attempts to make sense of Cosby’s rise and dramatic downfall. Archival footage reveals a side of the comedian at odds with his principled, family man public figure persona; the series also features interviews with several of Cosby’s accusers.

In 2018, Cosby was found guilty on three counts of aggravated indecent assault and was sentenced to three to 10 years in prison. A little over two years into his sentence, the Pennsylvania Supreme Court overturned Cosby’s conviction due to a “due process violation.” The 84-year-old is now out of jail and denies all charges against him.

Ahead of the docuseries’ cable debut, a Cosby representative issued a media statement labeled “Official Response to PR Hack W. Kamau Bell’s Showtime Documentary, ‘We Need to Talk About Cosby.’”

The response pointed out that the comedian had spent more than 50 years standing with the excluded, making it possible for more to be included in the entertainment industries. The response also cites judicial injustices the comedian has faced as a Black man living in America. 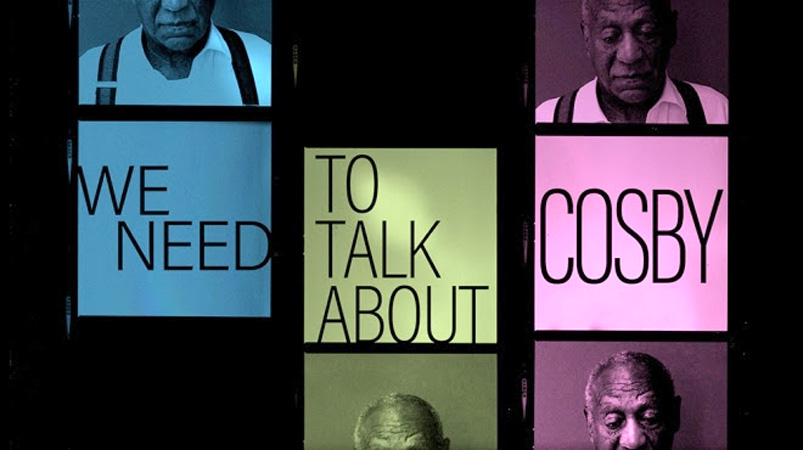 Overall, Bell says, the statement “feels very standard to the kind of things he and his team have said throughout the process of these accusations and allegations of assault that I hundred percent agree with.”

Bell, who executive produced and directed all four episodes in the series, knew from the start that he was one of several filmmakers working on a docu about the comedian-actor, who starred in movies and TV shows, including the long-running and Emmy winning series bearing his name, which was a top-rated hit for NBC from 1984-92.

“On good authority, I know that there is at least one finished documentary somewhere sitting on a shelf that they don’t know what to do with,” Bell says. “I also know there’s one that (Cosby) sat for. Sometimes we would call people and they would ask if we were one of the other Cosby productions and we would say no. We were always like, ‘We’re not connected to him at all.’”

Bell was more concerned about taking a deep dive into a pop culture patriarch and a pioneer for the Black community. Negative attention and potential vitriol, particularly from other Black people was always in the back of his mind.

“Every Black American has the right to be suspicious of law enforcement because of the history of this country,” Bell says. “It was a system built on racism. Law enforcement has been accused, arrested and convicted of murdering Black men for no good reason at all. On top of that, we have evidence that if a Black person is convicted of something they are overcharged for that crime in a way that white people would not be charged. So, I believe there are probably white supremacists in this country who are happy for Bill Cosby’s downfall. That doesn’t change the fact that I believe that he raped or assaulted over 60 women. Reckoning with those two things is what is what the doc is trying to do.”

Bell isn’t averse to tackling difficult subject matters. In the very first episode of “United Shades of America” Bell hung out with Ku Klux Klan members in Kentucky and Arkansas. But the director says that profiling Bill Cosby was more difficult.

“The only people who defend the Ku Klux Klan are people I wouldn’t be hanging out with anyway,” says Bell. “But a lot of people who are defenders of Bill Cosby might be at my family reunion. They might be a fan of mine who feels like I’ve turned my back on them by turning my back on Bill Cosby.”

The statement by Cosby’s representative suggests that a “professional documentary” would investigate prosecutorial violations such as those faced by the star.

“Mr. Cosby knows the realities of prosecutorial violations; and that those violations are threats to the integrity of our nation’s criminal justice systems. That is a subject matter for a professional documentary,” the statement reads. “Mr. Cosby vehemently denies all allegations waged against him. Let’s talk about Bill Cosby. He wants our nation to be what it proclaims itself to be: a democracy.”

To Bell, “it feels like a very boiler plate Bill Cosby statement. It felt in line with what I’ve heard him say before and what his people have said before. They always try to shift it from these credible accusations to this bigger story about America and racism and how he’s always been a champion.”

While Bell is ready for the docuseries to debut on Showtime, he is concerned.

“I worry about the random person in the street who Bill Cosby never met before and probably doesn’t care about at all, taking this so personally that they come at me,” Bell says. “It doesn’t feel super-safe to talk about Bill Cosby because Bill Cosby, as the whole documentary proves, works hard to come after people who he doesn’t feel like are treating him to the way he wants to be treated.”