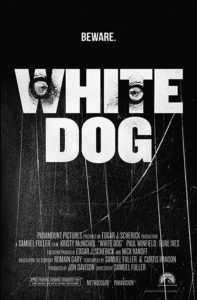 Synopsis: Deprogramming a dog who kills Blacks is the ultimate challenge for an unorthodox African-American trainer. When a young Hollywood actress finds the injured stray, she nurses it back to health, not knowing it’s a “White Dog” trained by a racist to attack only Blacks. Julie’s appalled when the otherwise gentle, white German Shepherd breaks out, then returns from his nighttime foray dotted with human blood. Julie desperately races from trainer to trainer, advised to kill her pet, until the top Hollywood canine expert refers her to his former protégé, Keys.