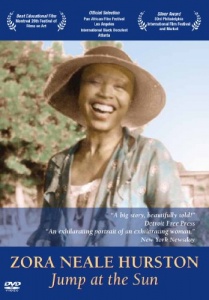 Synopsis: Zora Neale Hurston: Jump at the Sun intersperses insights from leading scholars and rare footage of the rural South (some of it shot by Zora herself) with re-enactments of a revealing 1943 radio interview. Hurston biographer, Cheryl Wall, traces Zora’s unique artistic vision back to her childhood in Eatonville, Florida, the first all-black incorporated town in the U.S. There Zora was surrounded by proud, self-sufficient, self-governing black people, deeply immersed in African American folk traditions. Her father, a Baptist preacher, carpenter and three times mayor, reminded Zora every Sunday morning that ordinary black people could be powerful poets. Her mother encouraged her to “jump at de’ sun,” never to let being black and a woman stand in the way of her dreams.