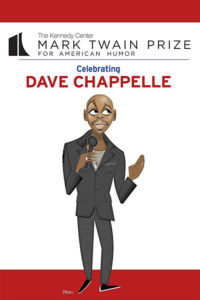 Synopsis: An all-star lineup of entertainers salute and celebrate the career achievements of comedian Dave Chappelle, the recipient of the 22nd Annual Mark Twain Prize for American Humor. The event was held at the Kennedy Center Concert Hall in Washington, D.C. and aired January 7, 2020 on Public Broadcasting Service (PBS).

Note: There are a lot of other famous people in the audience who are not credited.