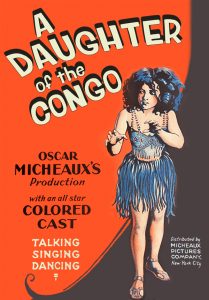 Synopsis: Lupelta (Katherine Noisette) is a mixed-race Congolese girl who was stolen at birth and raised by a hostile tribe. She is designated to marry a tribal chief, but on her way to the wedding she is abducted by Arab slave traders. Before she is sold into slavery, she is rescued by an African-American military battalion under the command of Captain Paul Dale (Lorenzo Tucker). Dale brings Lupelta to a mission school, where she is successfully acquainted with Western-style civilization. However, she never completely loses touch with the tribal customs and influences that shaped her formative years.

*The film is considered to be a lost.