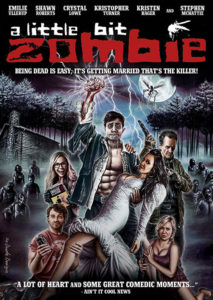 Synopsis: Infected by a virus, a mild mannered HR manager attempts to fulfill his overwhelming desire for brains, all while trying to keep it together so as not to incur the wrath of his bridezilla-to-be.

Note: Premiered at the Victoria Film Festival in 2012. Neil Whitely is only in the film for a moment. He is the host that appears in the viral video “Zombie Hunter guy FREAKOUT!!!” on the A-Wholes.com website.