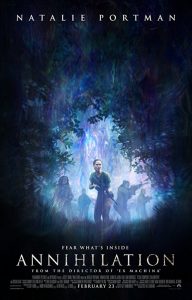 Synopsis: A biologist’s husband disappears. She puts her name forward for an expedition into an environmental disaster zone, but does not find what she’s expecting. The expedition team is made up of the biologist, an anthropologist, a psychologist, a surveyor, and a linguist. READ REVIEW

Note: The film was originally suppose to be released in 2017 but the release date was pushed back to 2018.