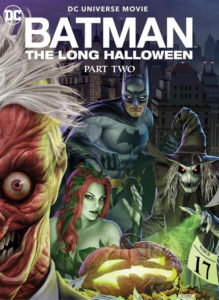 Writer(s): Jeph Loeb and Tim Sale (based on the graphic novel by); Tim Sheridan (screenplay)

Synopsis: The killer known as Holiday continues to stalk the Falcone crime family while a new class of costumed criminal rises in Gotham City. Batman suspects that a former ally might be the serial killer.